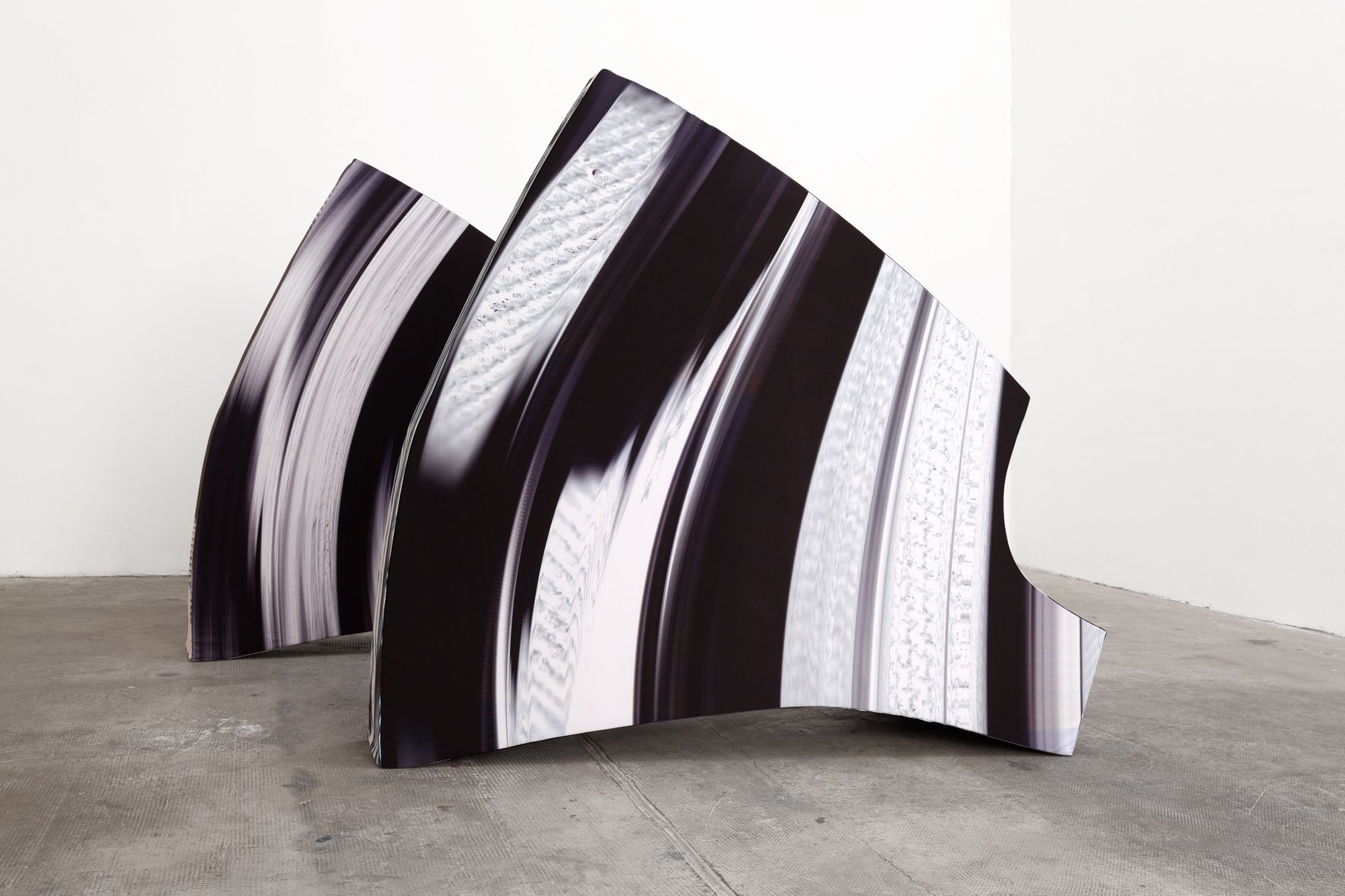 The work has been produced and acquired thanks to Cantica21. Italian Contemporary Art Everywhere | Sezione Over 35 (MAECI-DGSP/MiC-DGCC,2020) Artist Sara Enrico (b. 1979, Biella) focuses on what could be considered the “dimensional instability of painting.” Her approach springs from a matrix of pictorial concerns deeply attentive to surfaces and manual and digital processes.

Since her first series of works in 2010 and 2011, the artist has treated color as an element to be manipulated and canvas as a living material open to its three-dimensional surrounding space. Folds, pressures, wefts, anthropomorphic postures, displacements of coverings, slight sagging, and hints of a hypothetical choreography: over time, the works seem to center ever more on what she refers to as “expanded exercise” and “acted gesture,” open to relations with sculpture and tailoring, and interpreting reality through the experience of “tactile proximity.”

In her investigations of the relationship between the body, clothing, and space, and her experimentation with textiles and industrial materials, Enrico records and reworks shapes, epidermal qualities, and chromatic sensations. She observes these in the environments closest to her, such as construction sites, laboratories, studios, and the street. Her process is never rigid. “I am very impressed by the dimension in which a frenetic work activity is also concerned with its own aesthetic dimension,” she notes regarding a construction site near her old studio.

This constant drive of the gaze and this curiosity toward cross-contamination with other areas of research and production inspired the ongoing series to which RGB (skin) (2021) belongs. The sculpture is composed of two elements of the same size, all covered with polyester fabric sublimation printing, an ink-transfer system that releases color in contact with heat on the surface concerned. Originally developed for the flag and commercial banner market, this technique has found widespread use in the textile and fashion industries.

The shapes, made of foam rubber, have a potentially functional starting geometry. But, lacking a unique interpretation that identifies a front or a back, they echo shapes that the artist observes within industrial contexts, yet at the same time are new, ambiguous.

The texture resulted from a manipulation of a fragment of unfinished painting canvas that was processed directly on the scanner bed while the light was still moving, then digitally reworked using a photo editor. In this passage, or rather “transfer,” Enrico recognizes the possibility of translating, via the scanner and the physicality of a sculpture, her own gestural and choreographic intention. A visual horizon of codes opens, transcribing the tactile memory of the pictorial support.

Recalling a paper pattern, the printed fabric evokes a second skin, a covering, a garment. The observer perceives a magma of sensitive, generative, iridescent colors—a pattern generated by repeated, minimal variations. It recalls certain experiments in electronic music, where the volume is treated like living matter and where, in Enrico’s words, “the processing of sound as a physical source act on variations such as deformation, elongation, reduction, stratification.”